From March 27th 2011, Arriva will bring into force a new bus timetable for the 153 Bus Service from Market Bosworth to Leicester City Centre and will be abolishing the 152 Service from Ibstock altogether.

152 Service from Ibstock to Leicester Abolished

The loss of the 152 service will mean that residents of Ibstock will have no major bus service to Leicester aside from one service to Leicester in the morning, and one returning service in the evening. Residents of Barlestone, Newbold Verdon and Desford will see their bus service reduced to the 153 from Market Bosworth only apart from the service above which will instead terminate at Ibstock. 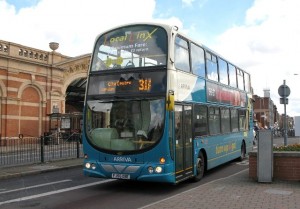 Due to the removal of the 152 Bus Service, anyone who regularly travels into Leicester for work each weekday will see a considerable increase in passenger numbers due to Arriva forcing people to share buses. Early travellers from Market Bosworth are offered buses leaving Market Bosworth at 0700 and 0730, however residents of Barlestone also have buses leaving at 0558, 0633 and 0703 (the latter arriving from Ibstock).

Should passengers miss the 0730 bus from Bosworth however, they will be forced to wait until 0840 before catching the next bus, and then every 30 minutes thereafter.

The biggest change for weekday passengers however is off-peak… 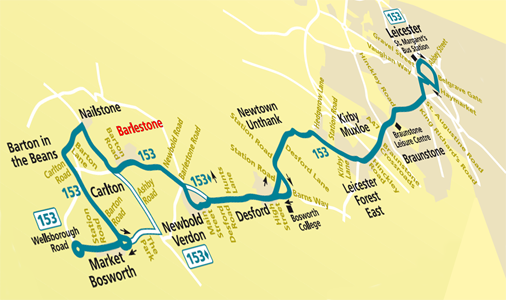 After the 1820 bus leaves Leicester for Market Bosworth, passengers still in Leicester will have to wait until 2020 for their next bus home. This is a wait of 2 hours, increased from the previous service of hourly buses. After this, a final bus at 2220 will be all that is available.

Aside from distruptions which are bound to be caused by the changes summarised above, passengers and retailers alike are bound to suffer as Arriva abolish the Sunday Service completely. Anyone wishing to get to work on Sunday, go shopping or save use of their car by taking the bus will now have no way of getting into Leicester at all, forcing them to make alternate arrangements.

Changes come into affect on March 27th 2011. Further details including links to the new route map and schedule can be found at Arriva’s official website.